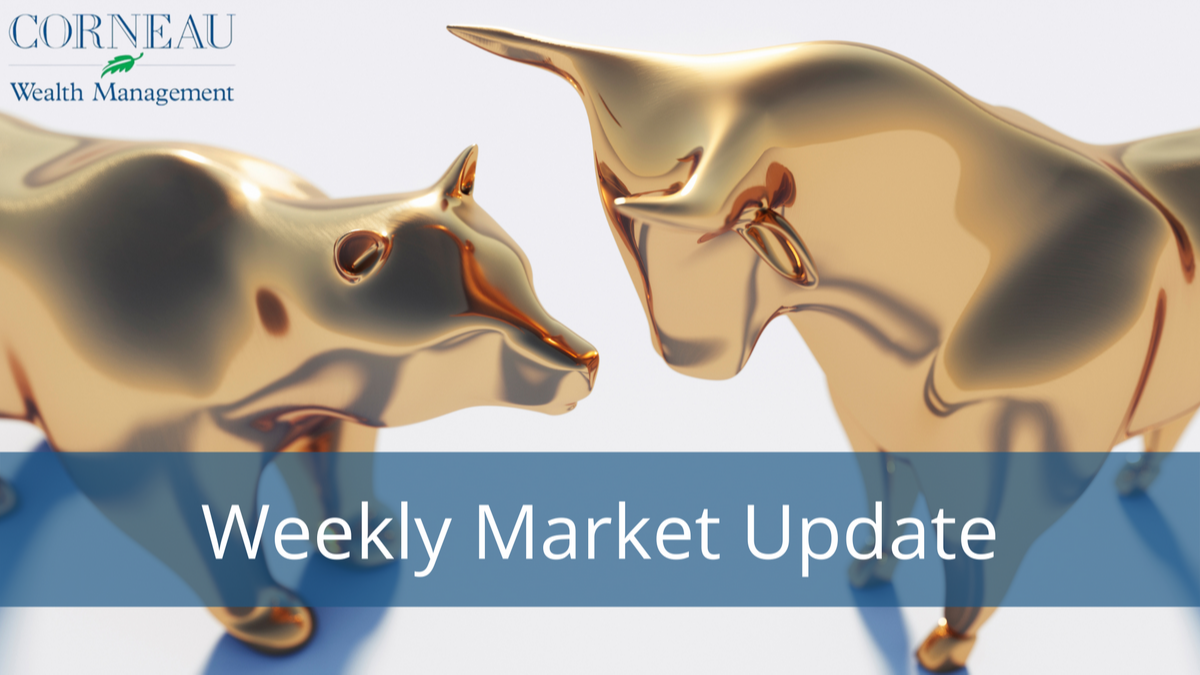 Economy Slowing But Not Shrinking

Many pundits are issuing recession warnings and saying the economy is heading for a hard landing. Amid the cacophony of voices, we think the economy is slowing just like central bankers want but not shrinking. Further, we argue that a slowing economy is very different than a shrinking one.

We believe the domestic economy will continue to grow this year. Other than the anomaly in Q1 GDP (gross domestic product), we think the economy has sufficient momentum to offset the inflationary pressures. “Our base case forecast includes an inflation rate that moderates as supply bottlenecks improve and we get some closure to the Russian war with Ukraine,” explained LPL Financial Chief Economist Jeffrey Roach. Figure 1 shows our most likely scenario: the economy avoids a recession as forecasted growth approaches 2.6% in 2022 with another downshift to under 2% in 2023. 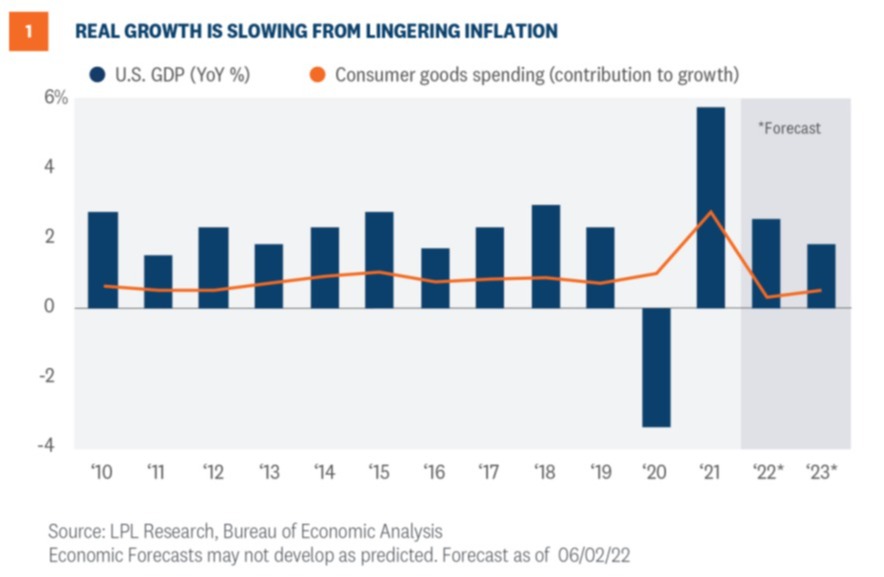 The U.S. economy grew 5.7% in 2021 after contracting by 3.4% the previous year. Last year consumer spending was extremely robust, particularly on consumer goods as consumers were still less inclined to spend on services. Goods spending contributed roughly 2.7 percentage points to the headline growth rate, the highest since 1955. While we do not think consumer spending will continue at this clip in 2022, the consumer will likely weather the headwinds of high prices and geopolitical uncertainty and support the overall economy throughout 2022.

Consumer spending will likely slow the latter half of this year as inflation pressures weigh on consumers and wage growth likely lags inflation. These factors in tandem will erode consumers’ real purchasing power. However, recent spending activity shows a fairly stable consumer. Real consumer spending rose 0.7% in April, the fourth consecutive monthly increase in real spending. The job market is tight, supporting consumer spending from gains in personal income, but the real cushion for consumers comes from roughly $3 trillion in excess savings accumulated during the pandemic.

INVENTORY REBUILDING COULD ADD TO GROWTH

If supply bottlenecks improve, we expect to see firms restocking inventories, supporting underlying economic growth. As shown in Figure 2, the latest reports from the Institute of Supply Management show that order backlogs are declining for both the manufacturing and services sectors. As firms have improved access to required inputs and as the transportation sector recalibrates to the current environment, the economy could likely see growth in the latter half of this year and avert recession. 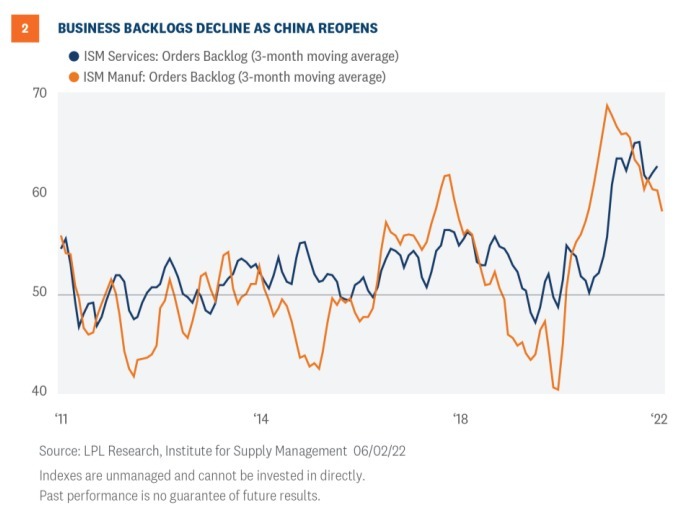 INFLATON IS STILL THE WILD CARD

Inflation will still likely be above the Federal Reserve’s (Fed) long-run target, but inflation growth rates will likely cool throughout this year. As shown in Figure 3, improvements in supply chains impacted consumer prices. Technically, consumer price changes lagged four months and are 72% correlated with the New York Fed’s Global Supply Chain Pressure Gauge. Given the improvement in supply chains, inflation pressures should subside. And as inflation eases, the Fed will not likely need to increase rates much above neutral. 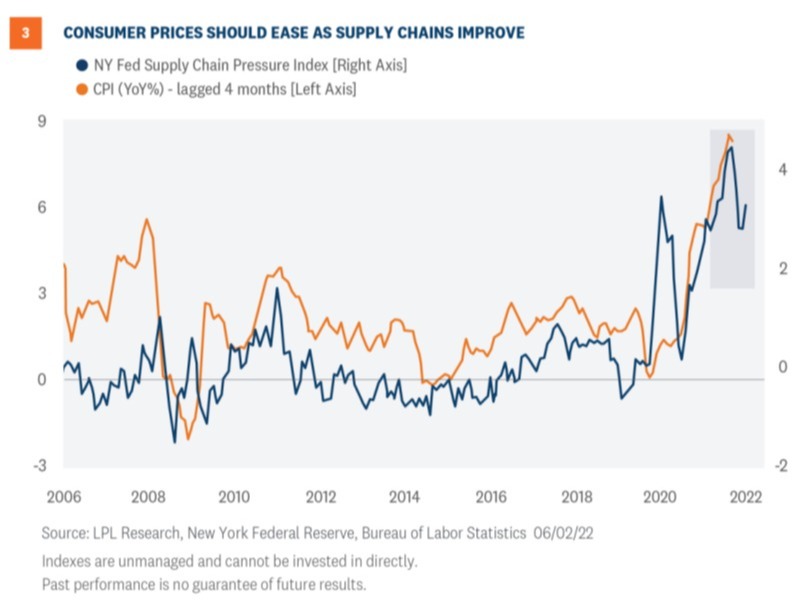 A slowdown in residential investment will likely have a big impact on growth this year. The slowdown could come from both the demand and supply side as interest rates increase. The average rate on a 30-year fixed rate mortgage rose over 2 percentage points since the beginning of the year and has created a damper on housing activity. Secondary effects from rising mortgage rates will likely slow consumer spending. At the beginning of this year, the principal and interest payment on a $300,000 loan at 3.27% was $1,309. At the end of May, the monthly payment rose by $366. As housing becomes a larger percentage of an individual’s budget, we will likely see a decrease in discretionary spending.

When we look at changes in borrowing costs we often focus on homebuyers, but higher borrowing costs also affect builders. High capital and labor costs are a current challenge for all builders, and high interest rates particularly impact developers who rely on the debt market for construction. Tighter financial conditions could eventually slow new home construction, putting a damper on home supply and residential investment. Inventories of new and existing homes are already low, and if builders slow the rate of construction, home prices will not likely decline as much as they did in 2006 – 2011 since current supply is low.

RISKS TO THE OUTLOOK

A still unknown variable to our forecasts is the Federal Reserve’s shrinkage of its balance sheet, known as quantitative tightening (QT). The Fed will only allow its balance sheet to shrink incrementally over time while also paying attention to the impact QT is having on the markets. The Fed has stated that QT could “replace” several rate hikes as a way to tighten financial conditions; therefore, we could conceivably see a lower fed funds terminal rate than what is already priced in the markets, which should help the Fed navigate a “softish” landing of the economy slowing but not shrinking.

IMPORTANT DISCLOSURES
This material is for general information only and is not intended to provide specific advice or recommendations for any individual. There is no assurance that the view s or strategies discussed are suitable for all investors or will yield positive outcomes. Investing involves risks including possible loss of principal. Any economic forecasts set forth may not develop as predicted and are subject to change.

Any company names noted herein are for educational purposes only and not an indication of trading intent or a solicitation of their products or services. LPL Financial doesn’t provide research on individual equities .

All information is believed to be from reliable sources; how ever, LPL Financial makes no representation as to its completeness or accuracy.