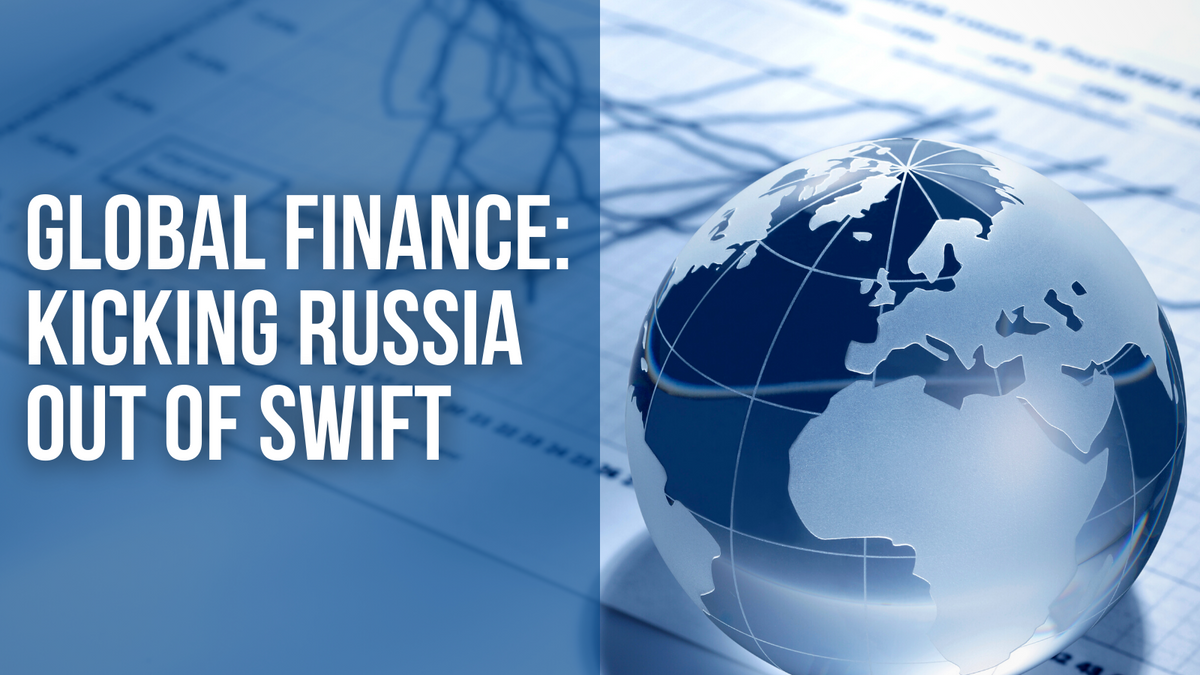 Over the past days, the United States and other countries have imposed various sanctions on Russia for its invasion of Ukraine. One sanction that was discussed initially but not implemented immediately was blocking Russia from the SWIFT global banking network. However, the United States and European allies eventually agreed to remove selected Russian banks from SWIFT. What does this mean?

What is the SWIFT financial system?

SWIFT, which stands for the Society for Worldwide Interbank Financial Telecommunication, is a cooperative of financial institutions formed in 1973. Headquartered in Belgium, SWIFT is overseen by the National Bank of Belgium along with other major central banks, including the U.S. Federal Reserve System, the Bank of England, and the European Central Bank.1

SWIFT isn't a traditional bank and doesn't move money like a traditional bank. Rather, it moves information about money, acting as a secure global messaging system that connects more than 11,000 financial institutions in over 200 countries and territories around the world, alerting banks when transactions are about to take place and facilitating cross-border financial activity.2

SWIFT communications are important to the global banking system. In 2021, SWIFT recorded an average of 42 million messages per day, an 11.4% increase over 2020.3

Blocking selected Russian banks from SWIFT is a drastic measure that could potentially result in significant economic pain for Russia, both immediately and over the long term. It essentially cuts Russia off from the global financial system.4

What was behind the initial delay in expelling Russia from SWIFT?

The United States favored blocking Russia from SWIFT at the outset,  but couldn't do so unilaterally. Such a move required the support of other European nations, and some of the 27-member nations in the European Union (EU) were initially hesitant. Because Russia is a key energy supplier to Europe, some European nations worried that expelling Russia from SWIFT could potentially disrupt natural gas supplies and make it more costly and complicated to send payments for energy and other goods.5 Another reason for hesitancy was the fear of jeopardizing a fragile post-COVID economic recovery in Europe.6

Additionally, there were concerns that blocking Russia from SWIFT would cause it to find alternative ways to participate in the global economy by forging stronger ties with China, developing its own financial messaging system, and/or creating its own digital currency. There was also the risk that Russia could attempt to disrupt the global economy through ransomware attacks.7

While the United States waited for buy-in from all 27-member EU nations to block Russia from SWIFT, it focused on targeting Russian banks directly in an effort to limit their ability to raise capital and access U.S. dollars. Russia's financial services sector is heavily dominated by state-owned entities that rely on the U.S. financial system to conduct their business activities, both within Russia and internationally. By targeting Russian banks directly with sanctions, the United States attempted to isolate Russia from international finance and commerce.8

Treasury Secretary Janet Yellen stated, "Treasury is taking serious and unprecedented action to deliver swift and severe consequences to the Kremlin and significantly impair their ability to use the Russian economy and financial system to further their malign activity."9

The road to SWIFT sanctions

Then on February 26, 2022, after intense international diplomacy and an impassioned  plea by Ukraine President Volodymyr Zelensky that by all accounts moved world leaders to act, the United States, Canada, the European Union, and the United Kingdom agreed to kick selected Russian banks off the SWIFT financial network.10 In making the announcement, European Commission President Ursula von der Leyen stated, "This will ensure that these banks are disconnected from the international financial system and harm their ability to operate globally.".11

Not all Russian banks were cut off from SWIFT, though. As a compromise, some smaller banks were allowed to remain to allow European nations to pay for natural gas (the EU imports 40% of its natural gas from Russia) and to allow the United States to pay for oil.12

Along with blocking certain Russian banks from SWIFT, the United States, Canada, the European Union, and the United Kingdom also announced that they would take additional actions against Russia's central bank to prevent it from deploying its more than $600 billion in reserves in attempt to "sanction-proof" Russia's economy. Ms. von der Leyen stated, "We will paralyze the assets of Russia's central bank."13

This is a fluid situation, and ongoing diplomacy around sanctions is likely in the days and weeks ahead.

This article was prepared by Broadridge.